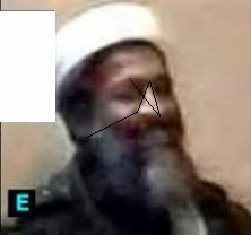 Guessed Which? Or do you think they're both the same man?

OK, now - no cheating - which one is the real Bin Laden?

I'm sorry. For you Tommy, the war is over. Please collect your orange jump suit on your way out...

Which of those "Bin Ladens" starred in the December 2001 " home movie" conveniently left behind by the antichrist in an abandoned apartment in Jelalabad and found by US forces just in time to release it to a gasping gullible media the same day that the 5 Israeli Mossad agents who had danced as the Towers collapsed, were being quietly deported?

This is just one of the strands of evidence being aired in a draft article you can find on the brand new web site representing the views of "Scholars for 9/11 Truth" of which I am pleased to be an associate member. You will find the answer - and the whole of that story - buried on page 23 of that 26 page Word doc.

Frankly, I think it should be the lead. I haven't come across anyone who gets the answers wrong. The truth being so "self evident", the conclusion does not require a huge leap of the imagination.
Posted by Harry Stottle at Sunday, January 29, 2006

Sadly, the evidence is overwhelming.

Not that I am one to America-beat, as I believe this to be a trait of all powers, but the lack of public demand for real answers is a real eye opener.

WHen Hitler wrote, "It would never come into their heads to fabricate colossal untruths, and they would not believe that others could have the impudence to distort the truth so infamously" we accept it as a ready truth, but one of the days before internet and blogs.

yes, I'm wondering what it will take to move us past the "tipping point"; the point at which the mainstream investigative journalists dare to poke their heads above the parapet and the mainstream media moguls let them...

Dave T doesn't believe we'll ever get to such a point - the big lie has already done its work and cannot be undone. But I can conceive of some examples of evidence which might have the desired effect - for instance a validated admission, from one of the black operatives who planted the demolition charges in the towers...

If and when that tipping point is reached, though, I think we will move into a serious crisis quite quickly. I have no idea how that's going to pan out, but I'm stocking up with tinned goods and bottled gas, just in case...

Yeah, I have to admit I don't think we'll ever reach the tipping point. I'm not even quite there myself.

I don't see how you can't see he is the same man?

Only a blind man would miss the obvious similarities.